This module appears in sub-patches as inlet or outlet.

This modules works only in sub-patches.

Inlet/outlet caption which appears in sub-patches.

Determines if the module inlet/outlet appears only once in polyphonic sub-patches, or if it is duplicated according the polyphony value.

Available only when the module is in a sub-patch. 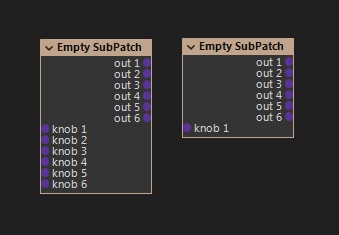 The actual data type of a once in poly node is similar to an array. Once inspected you can see that it is an array the length of the nb of polyphony selected for that specific sub-patch. Although an array in data-type, once in poly disguises it's data representation and only addresses the first index by masking as a single-data node.

Determines if the module is visible as an in/outlet in the subpatch.