The codec used for the video compression is very important. To explain simply, acompressed video flow is made of key frames, also known as an intra-frames followed by modified frames. A key frame is a frame in which a complete image is stored in the data stream. In video compression, only changes that occur from one frame to the next are stored in the data stream, in order to greatly reduce the amount of information that must be stored. See Wikipedia.

This means that, in a compressed video, you can't access directly to any frame but only key frames which can occur, for example only every seconds.

Another consequence is that a compressed video can't be played in reverse.

If you want to play a video in reverse, you must export it into separate images and use the video-player-image module.

If you want to access to any frames at any time, you can use uncompressed videos or use motion-jpeg compression. The motion jpeg format contains only key frames.

You can use a conversion tools to convert you videos to motion-jpeg, for example the free FFmpeg, and use the following command line:

Activates or deactivates the module.

When On, the master SMPTE follows the current SMPTE.

If ON, freezes the last frame when the player stops.

Pauses the playing (stops without restarting from the beginning)

Original file duration before the pitch is applied.

Frame Rate (Number of Frames per seconds) of the original video.

Video duration in ms of the video.

the duration is calculated according the speed, start pos, end pos parameters.

Video duration in ms of the entire video.

Gets the number of frames of the current file.

Name of the video codec.

Reduction size factor applied to the original size of the video.

This is useful to

This can reduce efficiently the number of pixels to process in the video flow and then reduce the CPU load of video effects.

The pos inlet is not suitable for precise random access to file position, use current frame num instead.

Gets or set the current frame number.

The current frame num inlet can be used for precise random access to file position, especially if you set speed=0 and only for motion-jpeg or uncompressed videos. See About compression format above.

Jump the reading position only to Key frames when pos or current frame num are changed. See About compression format above.

Output value of the user curve. Can be used to synchronize processing with the current video.

Hint text displayed on mouse over.

Background color of the control.

transparent option must be OFF.

Determines if the background of the control is transparent or not.

Example, the first module is transparent.

Background color when the control is modified by a remote (MIDI,OSC,etc.).

Optional Filename of the background image.

Only PNG, JPEG and BMP formats are supported.

Use [ctrl+click] to reset. 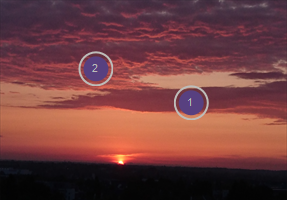 Force the image file to adapt its displayed size to the size of the object.

Displays or not the border of the control.

8 pixels border on an panel-xy-pad.

Sets the border width of the control in pixel.

8 pixels border on an panel-xy-pad.

Border color of the control.

a yellow border on an panel-xy-pad.

Border color when the control is OFF.

a black OFF border on a switch.

Border color when the control is ON.

a white ON border on a switch.

Enables or disables the drawing of a border when the control is selected with the mouse.

Displays or not the caption.

Example on a fader.

Caption alignement of the control : Left, center or right.

Vertical alignment of the caption: Center, top or bottom.

Font name of the control caption.

Example with 3 different fonts on switch.

Color of the caption font.

Underline style for the caption font.

Enables the drag on this control.

Enables or disables the drag&drop possibilities on this control.

Name of the dropped file.

Determines if the control can be modified by the user. When OFF, the mouse interaction and modifications are disabled so the user can't change the value.

Sets or get the visibility of the control.

Global color of the control. Usine will choose the best contrasted colors according the global color.

Determines the Z-order of the control

Example with the first knob on top.

Opacity value of the control.

0 will give a totally transparent control so invisible.

Blur amount applied to the object.

Be careful, the blur softness use shaders which are not supported by all graphic cards.
It can crashe Usine.

Displays or not the header on the panel.

Height of the header in pixels.

Background color of the header.

Determines if the horizontal scroller is visible or not.

The scroller appears only if the container is smaller than the controls inside.

Height of the scroller in pixels.

Current private id for this control.

If you experience difficulties in Polyphonic mode, try to recreate new id(s) with this button.

Each Patch shared on the local network uses its own ID (identification number). If you experience issues of Patches that don't send information to the good target, this button will rebuild all these id’s.

Opens the web browser to display informations or help about the selected object, if it exists.

Determines where the object is visible:

When the location is set to a container which doesn't exist in the patch, Usine try to find in parent patches, the first container available. If no container is available an error message is displayed.

When ON, will also be visible in the interface-builder-panel.

Gives the mouse state of the control:

Sends a 1 value if the user has [dbl-clicked] on the control.

Gives the mouse X position on the control in relative coordinates:

Gives the mouse Y position on the control in relative coordinates:

In touch and multi-touch environment, returns an array of the fingers movements See multi-touch

When ON, the value of the control is reset automatically on mouse up.

When ON, move up-down to rotate a knob, left-right when OFF.

Sends a 1 value when the control is hovered with the mouse.

Sends 1 when the control is mouse overed.

Sends 1 when the control is selected.

Top position of the control in pixels.

Left position of the control in pixels.

Height of the control in pixels.

Width of the control in pixels.

Horizontal position in % [0..1] relative to the parent panel.

Vertical position in % [0..1] relative to the parent panel.

Top position in pixels in the interface-builder-panel.

Left position in pixels in the interface-builder-panel.

Width in pixels in the interface-builder-panel.

Height in pixels in the interface-builder-panel.

Rotation angle of the control.

Rotates this control in vertical position.

Zoom scale of the control.

Determines is the control can be zoomed with the wheel mouse.

Determines if the control can be resized with the resize grip.

Determines if the control is minimized or not.

Determines if the control is movable on X axis.

Determines if the control is movable on Y axis.

When ON the control stays inside the parent on X axis.

When ON the control stays inside the parent on Y axis.

Determines if the control can be resized on its left hand.

Determines if the control can be resized on its right hand.

Determines if the control can be resized on its top hand.

Determines if the control can be resized on its bottom hand.

Enables physics-engine in this panel.

The physics speed of the control in physics-engine.

When ON, the physics-engine starts with a random speed for each child controls.

When ON, all controls have the same masses in the physics-engine.

The position control is not affected by the physics-engine.

Friction factor in the physics-engine.

Gravity factor on the X axis.

Gravity factor on the Y axis.

Position of the object when the physics engine is reset on X axis.

Position of the object when the physics engine is reset on Y axis.

Angular speed of the control in the physical engine.

Sends a 1 value when the control collides with another control or a border.

Gives information about the collide state in the physics-engine:

Speed vector value on the X axis in the physics-engine.

Speed vector value on the Y axis in the physics-engine.

Automatically reorganize positions of controls in the panel.

Interspace between controls used in reorganization, in pixels.

Resizes panels automatically when child controls are moved or resized. !!!!Switch it OFF if you use floating panels inside.

Margin in pixel used for the auto resize option.

Adjust the panel width to a multiple of the default rack width.

In unlock mode, snap the control to a grid.

Grid size in pixels when snap to grid is ON.

Displays the toolbar with its icons.

Example ON and OFF

Height of the toolbar % of the global height.

Example toolbar size on a panel.

Color of the cursor.

2 and 8 pixels cursor on a data-generator-sequenced-steps.

Opacity of the cursor.